Yesterday was a bit of a drag due to our long flight, lack of sleep, and jet lag. But we went to bed early, woke up late, and had a really nice first full day in London today.

Since we didn’t know what to do, we just started out with the most obvious attraction we could think of: Buckingham Palace. Here’s T and sleeping E just inside the Canada Gate, one of four big gates that lead onto the circle that surrounds the palace. There’s one shot of the palace itself as well. T took photos of me on her camera today, but since I’m posting you’re lucky that you only get my pics, which means mostly just T and E.

Next we walked around a bit and ended up seeing some nice spots. 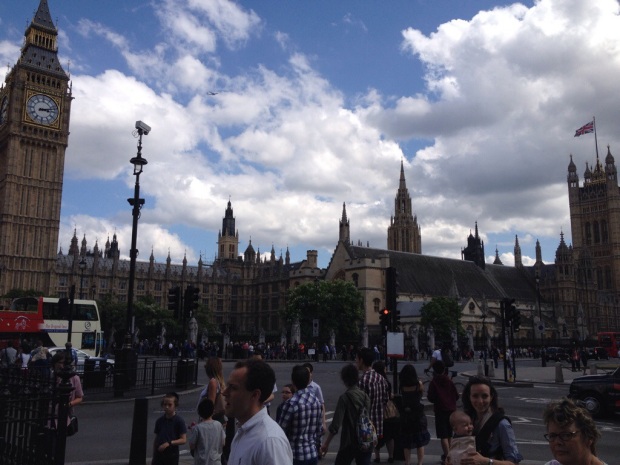 We also spent a lot of time in London’s parks and gardens. We had lunch in Green Park, where E enjoyed chasing the pigeons. We wandered through St James Park and Kensington Gardens and just the edge of Hyde Park. Found a great playground (Princess Diana Memorial Playground, complete with a huge pirate ship for the bigger kids) and actually visited some nice quiet areas in the middle of such a huge city.

This entry was posted on June 27, 2014, 5:57 pm and is filed under England, London, Travel, Uncategorized. You can follow any responses to this entry through RSS 2.0. You can leave a response, or trackback from your own site.